This summer Grandma Connie has inviated various sets of grandkids to spend a week with her in Cedar City. Samuel and Texas went a couple of weeks ago. This past week was Emily and Annie’s turn.

Grandma Connie has a new house in Cedar that is very Connie-esque. I like my Mom’s taste in colors, art, and overall decor; however, when she messes with the physical layout of homes she ends up with rooms that just don’t make any sense to me. A few examples: the little bathroom downstairs in her Salt Lake home and the ‘closet-bedroom’ in her Cedar home. Anyone who knows Grandma Connie will know what I’m talking about. (Mom, we love you – don’t take it personally. I would like you to be my interior decorator – just not my architect.) 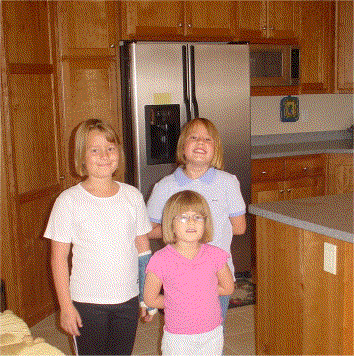 The Girls in Grandma’s New Kitchen

Anyway, Grandma Connie’s new house is pretty and the kids enjoyed staying there. Best of all she has a jetted tub which the kids think is just as good as a jacuzzi. Thanks Grandpa Kent and Grandma Connie for giving our kids a fun summer and for giving Nancy and I some peace and quiet for a change.

On Thursday Nancy, Texas Samuel, baby, and I drove down to Cedar City to have a vacation day of our own and to bring the kids back. The drive went by fairly quickly (our kids have always been pretty good travelers and we’ve been fortunate to have suffered only two major barf incidents on our summer vacations over the years) and we got to Cedar in time to play at the park for an hour before sunset.

On Friday everyone drove to Washington, Utah (just outside of St. George) to look up the headstone of Mrs Fan’s great-great grandfather in the Washington City Cemetery. Mrs Fan’s dad has been working on his genealogy and wanted a photo of the headstone:

Turns out old Grandpa Levi was an Indian fighter. Also in the Washington cemetery were several old Mormon polygamists buried next to their various wives and other interesting headstones dating back to the first Mormon pioneers in Southern Utah. I enjoyed wandering around and reading the old headstones but not everyone shared my enthusiasm as they were back in the car and anxious to go before I was really ready to leave.

On the way home from Washington we stopped off at Silver Reef, an old silver mining ghost town. Ghost town isn’t really the right word – several people live in Silver Reef and the town is quickly becoming an attractive place for California refugees to build retirement homes. The highlight of Silver Reef was a big 4-foot snake that Grandpa Kent picked up with a stick and scared the girls with. Actually, Grandma Connie was probably more scared of the snake than the girls. Nancy and I were in the car and couldn’t actually hear what Grandma Connie was saying but we could see her stamp her foot and get mad at Grandpa Kent for playing with the snake and I’ll bet $20 that Grandma Connie was saying “Kent! Kent! Stop that! Put it down! Kent! Don’t play with that!”. Unfortunately, Nancy and I weren’t quick enough with the camera to get a picture of Grandpa and the snake before Grandma made him leave it alone.

After lunch, Nancy, Emily, Anne, and I went to see Camelot at Southern Utah University’s Utah Shakespearean Festival. The play was so good that Emily and Anne surprised me and sat through it (3 hours long) with only a few minor wiggles. After the play it was time to attend the Cedar High Redmen football game against the Park City Miners. Watching the crowd was just as much fun as watching the actual game. My favorite part was when the politically incorrect “Redman” (Cedar Mascot) came skateboarding down the track surrounding the football field being towed by a moped. In terms of entertainment bang for your buck, nothing compares to the atmosphere at a small-town football game. 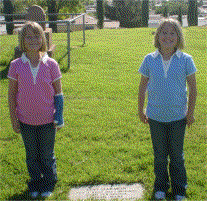 Emily and Anne at the Washington Cemetary

On Saturday morning we loaded the kids in the car and zoomed back to Salt Lake with only two potty stops – the end of a perfect weekend trip.