Sam has been asking me since before last Winter if he could have a lemonade stand. I took the day off today because we were originally planning to go and pick blackberries; however, the blackberry farm said the berries wouldn’t be ready until next week. A hot summer day with nothing else to do? That is the perfect time for a lemonade stand.

Nancy made the lemonade. Anne baked some chocolate chip cookies and helped them do the sign. After a quick trip to Sam’s club to get some plastic cups we were ready. I loaded up the wagon with the goods while Emily, Caroline, Sam, Diana and the neighbor girl all headed out to find the perfect spot for the stand – right on the front sidewalk. I told them they wouldn’t get any traffic on our sleepy street and that it was better to set up on a busier street. We headed out to the busy street behind our house that marks the entrance to the subdivision.

I helped them get the table and sign set up and instructed them on how to make change and to make sure they used a napkin when they gave people a cookie and then I set off for home with a warning not to eat and drink up all of their merchandise. When I set off, panic set in:

“But dad, nobody will stop on this street. This is embarrassing”
“Of course nobody will stop when you’re standing in front of the sign. You’ve got to stand behind your sign and wave at cars and then they’ll stop”

The kids weren’t very convinced that I had selected a good spot and weren’t too sure they wanted to be in the lemonade business but I left them there and went home to fetch Nancy and the camera. I was gone only about 5 minutes and when I came back they said “Dad! We got a customer” The neighbor lady whose lawn they were utilizing had been their first customer so they didn’t feel too bad about the spot anymore.

Nancy started buying a lemonade and I started to take pictures when the best customer of the day pulled up: a big FedEx truck! The kids’ eyes were wide as plates and their jaws dropped open. They couldn’t believe that a FedEx truck had stopped for lemonade. The driver ordered “two lemonades and a cookie”. The kids just kind of stood there with their eyes bulging out so Nancy had to coach them a bit on getting the driver his order. Lemonade was 25 cents and cookies were 50 cents. That meant a whole dollar from one customer! The driver gave them two dollars and said the second one was a tip. 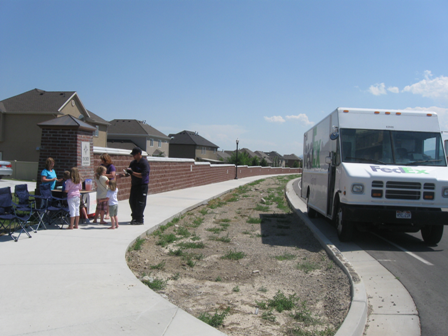 Thanks Mr. FedEx guy! You made their day

After the FedEx guy the kids were convinced that I had chosen a good spot. After about a half hour the first casualty was Diana. She was hot and didn’t want to sell lemonade anymore. She wanted to play with her friends. A half hour later Buddy was the second casualty. He said the girls were being mean to him (they probably were) and that he didn’t want to sell lemonade anymore and wanted to play with his friends. I told him that it was his lemonade stand so if he didn’t want to do it anymore I would come and take it down. He said the girls still wanted to keep selling lemonade so I decided to let them keep going. I left them out there another two hours before I decided to go check on them. When I got there, they were drinking up the last of the lemonade and all the chocolate cookies had vanished. They all had big chocolaty grins and sunburns on their faces.

We took the stand down, packed up everything, and hauled it back home in the wagon. I counted up the money they had earned and was surprised to discover that they had made 11 dollars. Not bad for three hours worth of lemonade and cookie selling. The only problem was that the 11 dollars didn’t seem nearly as big an amount when it was split 6 ways (Anne got a share for making the cookies and doing the poster). Overall it was a fun activity. They kids had a good time and Nancy got a couple of hours to herself. Maybe next summer we’ll do another one.